In response to The Daily Post’s writing prompt: “The Kindness of Strangers.”

I was going to write about how I am, once again, stuck in the eternal predicament of getting rejected for being a non-native writer, but, then I put my Sagittarian optimism (yes, I am that hopeless) to good use and found a silver lining in this dark cloud.

My act of kindness came very recently by Linda Formicelli. Those who run in freelance writing circles may recognize her as the mind behind the famous website, The Renegade Writer. You see, I am a religious reader of her blog. She always has wonderful insights and tips for novice writers. I’d like to think of her as more than a stranger, but since we had never had personal contact until today, I will refrain from doing so.

As I told you earlier in this post, I am stuck in the never ending spiral of rejection solely due to my nationality. No matter how much websites like my work, they take a step back and ponder before hiring an Indian. My predecessors (I’m talking to you, people-who-pay-less-than-a-dollar-for-a-five-hundred-word-article), sadly, have ruined any chances for me to make it as a freelance content writer.

Thus, I was wallowing in my misery and cowering in the face of my unsure future, when like a beacon of light in a dark night, I received the daily email from Linda. I hadn’t actually planned to reply to her, and had certainly not counted on her replying to me. However, a little voice in the back of my head said, “She is the answer.”

So, I wrote her a long(ish) email about how I had been stuck in the vicious cycle of content mills until her advice encouraged me to quit. I also told her that things hadn’t been much better for me since as far as my career in writing was concerned, because my nationality was following me around like a dark shadow (this, in no way, is meant to be racist).

A few hours later, I got this ( I would have attached the screenshot, but my internet hates me for some reason. So, I am writing what she said in the exact way she wrote it):

Your written English is EXCELLENT – no one would know you’re non-native (. . .)

If you have ever been rejected, you would know how I feel presently. I know they say that your abilities are not measured by the applause you get, but by how you put them to use. However, for a person who is just starting out as a writer, and whose capabilities have, unfortunately, been shadowed by something she cannot control, these words were Manna.

There were no bells and choruses of soaring music in my head, but I was left with a smile on my face because an honest-to-God writer had seen something in me and acknowledged it. It was a rush of confidence, and it pushed me to work harder and write better.

I know there is a fat chance she will ever read this, but in the event that you do, Linda, I want to thank you for your words. They helped me tremendously.

Oh look, I ended up writing about my eternal predicament after all. At least I was optimistic about it. 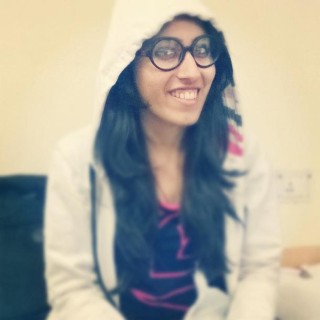 I'm making it up as I go. Oh, and I write fanfiction too (some sort of complex, I suppose: working it out as I go.) Also, a freelancer. See? Just prattling off things off the top of my head. I'm eccentric that way.

There was an error retrieving images from Instagram. An attempt will be remade in a few minutes.